OUR HISTORY
It all begins with Mark Ricci's Memory Shop in NYC.
Excerpted from Newsday(c) Lifestyles article June 2002
It all started with my roommate, Kevin. DAMN YOU, KEVIN! In the stack of the Memory Shop we were permitted to search through endless boxes of paper. You never knew when you might stumble on a treasure. Under the letter H we thumbed through a number of nondescript titles like Harvey etc, harum scarum etcetc and then discovered a Manila folder (okay, once Manila but now the color of soot) with the marking Hayes, Allison. Lo and behold, here were four pristine folded 1-sheet for The Attack of the 50 Ft. Woman starring, of course, Allison Hayes! This is how it went. I guess it all started for me at the Memory Shop at 109 East 12th Street in Manhattan. Owned by the eccentric and irascible Marc Ricci. This was not the gentrified post-Millenium East Village of yuppies and hipsters. Marc's shop was just one block off the Bowery and back then the only culture clash was between winos and junkies. This was way before the age of "branding" where a Starbucks occupied every corner and you could still find funky little shops that made you actually pause and ask yourself "I wonder what they sell in there?". The Memory Shop was just that kind of place.
Well as far back as I can remember I've been a collector. Seashells, rare stones, Indian arrowheads, stamps, coins, baseball cards, comics and you name it. I really don't think you can be successful in the movie poster business if you're not a collector at heart. It was my college roommate - Kevin - who first introduced me to collecting movie posters and I was immediately hooked. To give a little perspective, in the olden days before the internet, collecting movie posters was very much a fringe hobby. They might turn up at the odd estate sale, they could be found at memorabilia shows and - if you were fortunate enough to live in a big metropolitan area - you could actually find a store or two devoted to Hollywood collectibles. But they were not easily found, and - mention conventions trade shows, stores in big cities. As any devoted collector will tell you, the hunt is half the fun. So pursuing movie posters became a passionate pursuit.

It all started in the late 1970s, when Kevin and I discovered Mark Ricci's Memory Shop on 12th Street in Manhattan, a 6,000-square-foot storefront packed to the rafters with a million old movie posters, stills and pressbooks. The Memory Shop was not the type of place where you could browse; you had to know what you wanted. But if Mark took a liking to you, and you caught him in the right mood, he would allow you to buy movie posters in quantity. A large bankers box of movie posters for $500. Kevin and I bought our first box in 1978 and the game was on. We figured, a bit naively, that we could sell a small handful of the contents of the box and keep the rest as pure profit. Our calculations were a bit optimistic, but we figured this would be a perfect way to subsidize our own collecting.
I wish I could find a photo of the interior of the Memory Shop because it maintained a level of clutter and filth that is hard to describe. There was a high desk / countertop on the left as you entered, and Mark usually held court from this position, most often in a white t-shirt regardless of the season. The countertop itself was a marvel. In addition to stacks of ephemera, there was always a plate of cat food for his army of feral felines. But what I always found most disturbing, and not just because of its proximity to the cat's plate, there was often a plate of some sort of pastry that I imagine some neighbor had donated. It might be coffee cake, or a pie, or a strudel. And Mark would always offer customers a bite as they entered. It would be almost rude to refuse. One day it was a poppy seed babka. I remember staring at this creation - literally inches from the cat bfood - and trying to determine if it was safe. Kevin nudged me and said "Is it just me, or are some of those poppy seeds moving?". The place was infested with cockroaches.
Larry Fine of the 3 Stooges stopped by the Memory Shop in 1968. Here's Larry mugging with local collector Paul Rubin. Mark Ricci is on the steps behind them, holding up the 1-sheet for Three Missing Links, a Stooge short from 1938. 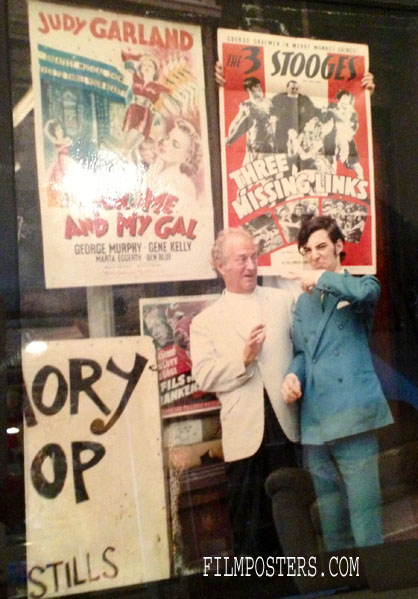 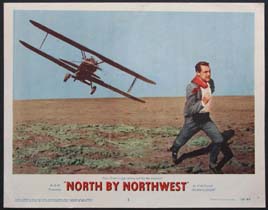